April, where did you go?
I’ve been really busy with University applications and trying to find myself a job. I didn’t read or write as much as I wanted to this month, but I am being productive. Yippie!
I picked up a small collection of H.P. Lovecraft’s work and I just need to say this right now, I am enamored. Blown away by the way he uses words. The way his stories aren’t in-your-face freaky, but totally elegant and classy. So far I’ve read Rats in the Walls, the Picture in the House and the Outsider. I missed my bus stop because I was SO INTO THE BOOK (first thing for everything, right?). Now, I have to read aloud because it is too incredible to keep in my head; I need to experience it with more of my senses. Don’t worry, I don’t read aloud on transit… just in parks.

EERIE Archives Vol 1 by Dark Horse Comics.
The first 5 EERIE! horror comics compiled from their release in 1966. Colour and content are all fantastic quality. I especially enjoyed reading advertisements from the original comics.
Keep an eye out, if you’ve ever wanted to have your own pet monkey for $20! :} 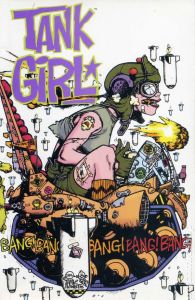 Tank Girl: The Odyssey by Peter Milligan and Jamie Hewlett.
A tribute to Homer’s the Odyssey. Booga is plagued by Hollywood producers while Tank Girl is away. Their son, Telemakeus tries to contact her, and chaos ensues. The writers are clever and witty, but I’ve never read the original story by Homer, so I can’t tell you if they stayed true to the original.

The Sweeter Side of R.Crumb.
A collection of Robert Crumb’s drawings. The intro says that he is trying to get more females to like his work… now I can’t tell if this book is one big joke or if he is sincerely generalizing women by thinking we’re going to want pictures of cats and children, landscapes and clothing. I know that he is trying to show his ‘sweeter side’, but I like his normal work WAY better than what is in this book.   – Female Opinion.